Behind the scenes on blu’s latest campaign

If you’ve been out and about in London over the past few weeks, you might have noticed the latest out-of-home advertising campaign from blu.

If you’ve been out and about in London over the past few weeks, you might have noticed the latest out-of-home advertising campaign from blu.

But beneath the billboards, the bus posters and the taxi wraps, there’s a story of immense creative collaboration – not to mention many hours of design work – that goes into creating a campaign for a major brand like ours.

Blu worked with London-based creative agency Come the Glorious Day, who were tasked with creating a campaign that was unmistakably blu.

As Come the Glorious Day’s creative partner Matthew Anderson explains, the agency wanted to ensure it developed a campaign that was accessible to blu’s target consumers.

“We opted for an illustrative style because photographs can be polarising,” Anderson says. “We’ve all seen ads where they try to hold a mirror up to the audience, ‘look like me’ or ‘do what I do’, and you end up thinking that person isn’t anything like you. With illustration it’s much harder to dislike the people in the campaign.”

Before they started mapping out what blu’s world would look like, Come the Glorious Day meticulously researched hundreds of illustrative poster campaigns.

“We looked at everything from London Underground posters from the 1930s and 40s to Pop Art of the 1960s and 70s,” Anderson says. The agency still has Pinterest boards with scores of images saved on them, which acted as inspiration for blu’s campaign.

From here began the work to bring their creative vision to life.

“Developing the characters took days of painstaking work," Anderson says. "Firstly, we carried out a one-day still and video shoot in a studio with half a dozen models. We chose models because they know how to move and respond to a photographer's commands, and could achieve the sort of body positions we were looking for.

“Once we’d chosen our favourite shots and our favourite poses, the real hard work began. A team of graphic artists hand-traced vector lines around every pose and every body part. To give you some idea, some of the moving image digital adverts had as many as 15 hand-created images, which were then rotoscoped and merged to make the finished article. Each of those images could take between 45 minutes to an hour, and when you consider there were multiple executions, the designers really earned their stripes.”

As the campaign evolved and developed, Come the Glorious Day worked closely with blu to hone the visuals, refine the characters and deliver the perfect outcome.

Blu brand planning executive Sally Baker says: “We really enjoyed working with Come the Glorious Day on our latest campaign. It’s no mean feat developing something on this scale, but it was a pleasure to see the adverts evolve and take shape. With every revision and every little tweak, I could see the campaign getting closer to where we wanted it to be – and I’m really happy with the final campaign that we’ve both delivered.”

By the end of the process blu had a full set of characters all united by a distinctive illustrative style, which would form the backbone of blu’s campaign. The characters were given names, the same names as the models who posed for them: Karlo, Louis, Liv, Charlene and Meaghan. 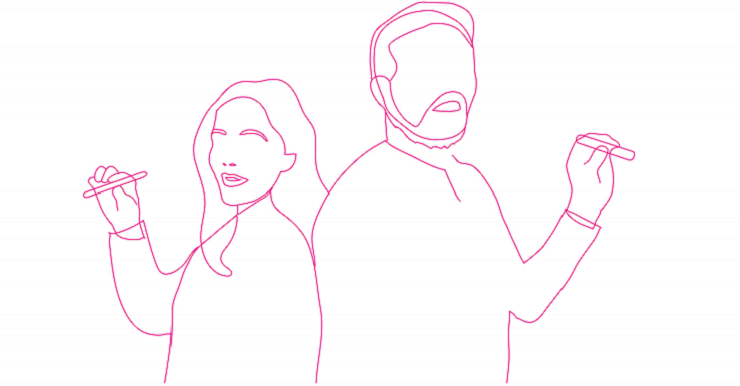 In the first case, Come the Glorious Day’s account manager Charlotte and creative partner Matthew Anderson stepped into the spotlight and were used as the foundation for the very first characters that Glorious Day created. “We were replaced very quickly, which I think was for the best,” Anderson remarks.

Now that the visual set had been created, the agency went about establishing an entirely new language to accompany it. They took inspiration from the vowel sound in the brand name blu, initially identifying poetic slogans such as ‘i blu du yu?’ This then evolved into the final messaging used in the campaign.

The adverts were rolled out across various touchpoints at the beginning of June and will be visible to Londoners until the end of August.

“We’re very proud of the campaign we delivered, and it was a pleasure working with the guys at blu,” reflects Anderson. “It really is testament to how well we all worked together. We look forward to what the future has in store.”