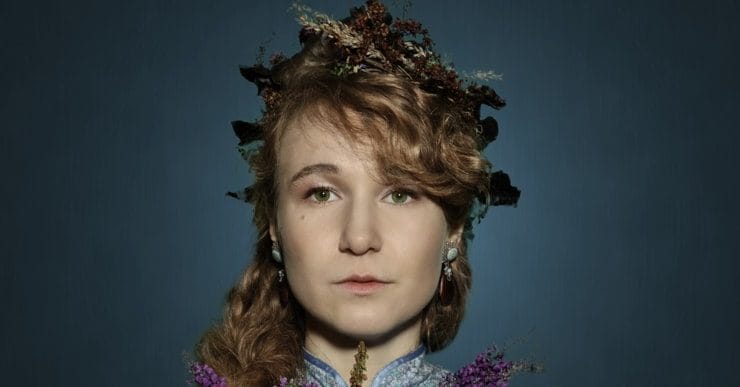 In conversation with lizabett russo

Scotland-based singer-songwriter Lizabett Russo released “The Traveller’s Song” which was received very well by critics from online publications in Europe, the US and Canada.

Scotland-based singer-songwriter Lizabett Russo released “The Traveller’s Song” which was received very well by critics from online publications in Europe, the US and Canada. Lizabett Russo has already gained recognition across Europe having played shows in Amsterdam, Zurich, Barcelona, Paris and Bucharest. Her work has been featured on BBC Radio 3 and BBC Radio 6 as well as international radio shows all over the world. Two of her tracks are also set to feature in the upcoming independent short movie “’Bloodloss”. She has also supported acclaimed musicians such as Rachel Sermanni, Rozi Plain, Tim Edey and Trembling Bells.

blu: How would you describe your style to someone who has never heard your music?

You self-released your EP, Travellers Song, in 2013. How was your music received by fans in the UK?

During that time I got lots of nice reviews from music blogs and magazines from all over the world. It’s amazing how far can music reach through the internet. I remember receiving a very lovely message from Indonesia asking me to perform there one day.

After releasing your EP, did you gain more exposure from online plays or from the live shows you we’re playing?

A mixture of both. More exposure locally by playing live and online exposure through reviews and general social media networking. You’ve played shows across Europe and Japan. Would you say your travel experiences and meeting with artists from different cultures has influenced your music style and lyrics?

Definitely. I have been listening to traditional music from all over the world ever since I was little. Growing up with different ways to perceive and listen to music gave me lots of musical ideas that are with me to this day. My mum was always playing traditional music in the house. I would say that my travels throughout Japan were very inspirational for my music and my sound.

Do you think the cultural influences in your music is something which makes you stand out as a musician?

Not sure what makes me stand out as a musician. I gave up thinking that I need to do something to stand out. I just want to be happy and truthful to the music I feel like creating and playing. Happy just to be.

At what age did you discover your love of music?

I think that happens to everyone at birth.

Who did you grow up listening to and how has it impacted your music style today?

My mum used to play traditional Romanian music in the house. I grew up listening to that for a very long time. And then I got into listening to Japanese traditional music and whatever I could find on the internet. I was probably around 14-15 years old. I listened to all genres. I guess I was curious. Maybe my brain stored up all sorts of influences and sounds and use it in the music making process.

I don’t really have a writing process. I usually just sit around playing around with some chords and even just hum something and if the time is write a song will come out. It’s almost as if it is coming from somewhere and I am just getting in down on paper. The brain chews up all the info he’s given and then spits it out in the form of a song. I write about things that are relevant to me like society problems, a bit of fantasy, political issues, love and life. I take great inspiration from watching anime, especially the Studio Ghibli movies.

You’ve supported artists such as Rachel Sermanni, Tim Edey and Trembling Bells. Did they give you guys any tips when it comes to songwriting and performing?

Watching these artists do their thing is good enough for me. It reminds me that everyone has their own unique way of being and expressing themselves.

Where would be like to be in 5 years time and how do you think you can get there?

I just want to keep on playing tours music, tour and see the world. The only way of getting there is by doing it all the time. Consistency.

Scotland has some amazing venues throughout the country which support unsigned musicians. For example, Woodend Barn in Banchory and The Glad Café in Glasgow.

Both. Sometimes it feels that there’s too much going on in the Internet and people get confused and “afraid” to explore something new.

Do you think smaller gig venues are the backbone of British music industry?

Yes, I love playing in small intimate venues. They suit my music better than bigger places. You can connect with people much easier and it gives you the feeling of playing for your friends in the living room. Everyone feels cosy and attentive.

If you could choose a festival to headline in the next 10 years, which one would it be?

I am not a big festival person but I would like to headline the Montreux Jazz Festival.