Get to know bite the buffalo

Bite The Buffalo were formed in the Copperbelt Province of Zambia and are made up of brothers Stos and Miti Goneos along with Cass Jones and Jake Meeking.

Bite The Buffalo were formed in the Copperbelt Province of Zambia and are made up of brothers Stos and Miti Goneos along with Cass Jones and Jake Meeking. With their roots in the Zamrock genre they take inspiration from desert rock pioneers Queens Of The Stone Age, Bite The Buffalo released their second album just last month. Bite The Buffalo are also influenced by 60’s and 70’s rock, psychedelia and featuring strong blues overtones, the band brings dirty riffs and melodic harmonies together to create an unmistakable desert rock sound with stadium-filling appeal.

Where did the band originate?

Stos and Miti originally formed the band and we grew up in the Copper Belt in Zambia.

To someone who has never heard your music, how would you describe your style?

Like a booze-soaked road trip in a bus being driven by a strange uncle, destination: wasted.

Having moved from Central Africa to the UK, would you say your music style blends African music and British music in any way?

Yeah in some ways, definitely lyrically as we write about what it’s like to live out there, but also the way we were exposed to music. Zambia is a couple of decades behind the UK musically so when we were living out there the 90’s hadn’t even happened yet. We get described as desert rock alongside bands like QOTSA and Eagles of Death Metal so I guess the Zambian environment influenced our sound too.

Do you think the cultural influences in your music is something which makes you stand out as a band?

Without a doubt! Between the four of us we’re a really unique blend of musical influences and styles.

At what age did you guys discover your love of music?

When we played our latest album last week! Seriously, our Uncle David turned up at our house when we were kids with long hair and a love of Michael Jackson records and that’s when we discovered music properly. The first live gig we ever attended was after we moved to the UK (in 2006) when we saw Jake’s band play, Joe Public. That’s why we love him so.

Who did you grow up listening to? And have they impacted your music style today?

Stos: It’s a cliché but it was the Beatles. And Elvis. Like we said, Zambia was a couple of decades behind you guys over here…

Miti: Same for me obviously, but I remember Michael Jackson and Elton John getting played a lot too.

Jake: Nirvana for me all the way.

Cass: James Blunt! (others laugh) Mostly Queens of the Stone Age. And yeah, between us we kind of manage to blend all those bands.

Usually we start with beer and wrestling. That’s quite inspiring. Some of our gigs start that way too. Really we just get the four of us in a room together, and we’ll start with a riff. It’s all about the groove.

After you guys took stage at Glastonbury Festival you got the attention of Led Zeppelin’s Robert Plant who invited you guys to join him at the Manchester Apollo. What was that like?

Awesome, it was our biggest show at that point and amazing to play to his audience. We gained loads of fans from that show.

Did he offer any advice which has helped you guys grow over the years?

Yeah, he offered us a grandchild! True story – Cass is his grandson and joined the band after we supported Plant!

Where do you see yourself in 5 years time and how are you going to get there?

Still on the bus but we’ll have replaced the Uncle with Josh Homme. Miti hopes to have learnt to play the drums by then. And we might stop off at some stadiums on the way. 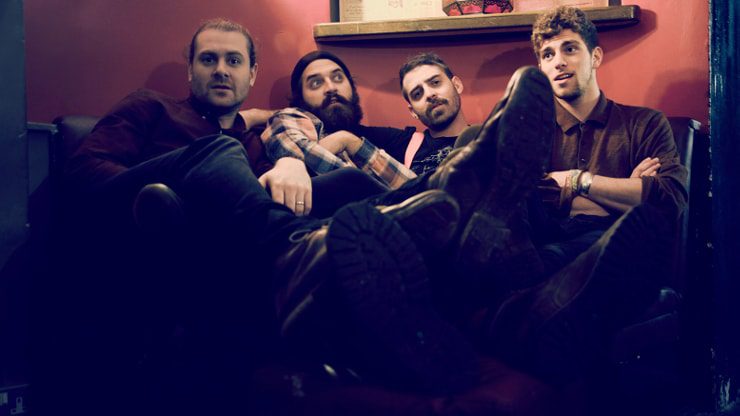 A combination of both. Mostly it’s a great thing, it allows bands to start their own labels and to network with other bands around the world in ways you couldn’t before, and of course you can keep in contact with your fans all the time. It’s amazing how many of them do want to see where you are and what you’re doing. We could post a picture of a dump we took and get a ton of likes, which is crazy. But on the other hand there’s nothing as good as sharing a beer with your fans after a live show, the internet will never replace that. Also – never read YouTube comments. That’s enough to destroy a band right there.

Do you think smaller gig venues are the backbone of British music industry?

Of course, and it’s a dire situation with the numbers of venues that are closing down.

From your experience, do you prefer to play small, intimate stages or larger venues? Large ones – we get a dressing room and a rider! Seriously we love anywhere we have a good crowd, whether it’s 50 people or 5,000.

What are you guys got lined up next?

There’s loads of stuff happening around the new album, “Big Blind” (which came out at the end of June), with videos and a full tour to be announced. Check out our Facebook page for more info.

Pyramid Stage at Glastonbury all the way.