DarkMatta perform original live band Drum & Bass in shows across the south east, Brighton and London. DarkMatta were recently featured on BBC Introducing with a Live Lounge Session Interview as well as being featured for Track of the Week on Best of British Unsigned Radio, Radio Reverb and Rough Tempo Radio. The group have supported a number of well-known acts including The Egg, Zion Train, Slamboree, Atomic Hooligan, and DJ Brockie.

How long have you been together?

Can you tell us a little about how you met and what made you decide to work together?

Ed, Bluebelle Jade and Cosmic Velocity met at Northbrook College, Worthing in 2009 studying Music Production. But despite having a few jams, we didn’t go on to form DarkMatta until 2014. Ed met SyDMC and was inspired by his pure passion for Jungle/Drum&Bass, along with his stories of MC’ing at NuSkool Pirates Nights in New York City and appearing alongside Paul C, David Boomah, Raw Q and more!

We got a lot of love from Melita Dennett on BBC Introducing The South, adding our debut track “Bringing You Down” to the BBC Introducing Playlist as well as booking us in to perform a live D&B session on BBC Radio.

Is there a story behind the name DarkMatta?

You recently played in Glastonbury, how did it feel to play to crowds at Britain’s hottest festival?

It was definitely the best moment of our careers so far, we feel very blessed to have had the opportunity to play in our favourite area of Glastonbury Festival – The Glade Area – alongside some of the greatest artists in electronic music. We were humbled by the support we were getting and all the work put in from our band manager Terri Hosford.

Which one of your songs was the crowd most hyped for?

From your experience as unsigned musicians, where in the UK would you say offers the most opportunities for exposure and gigs in the UK?

London, Brighton and Hastings are the best down south but we haven’t really toured up north yet so don’t know what the scene is like up there. 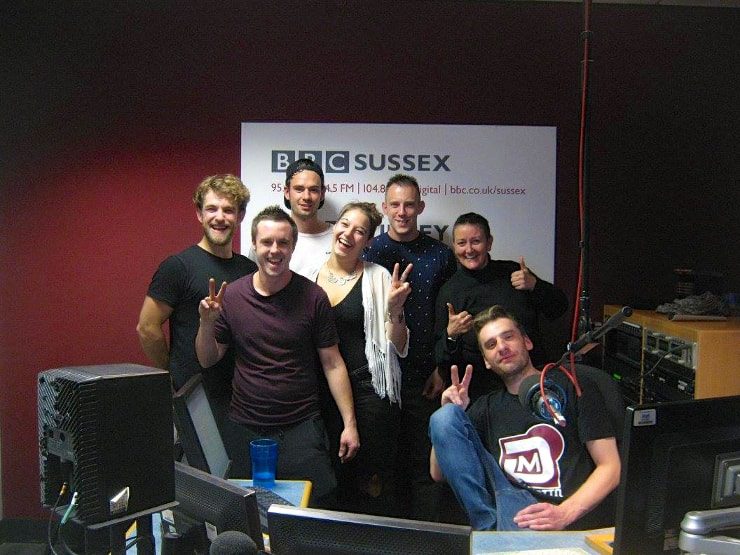 With the internet being a prominent medium in the music industry, do you think it’s easier, or more competitive for unsigned artists to get recognised?

I’d say both! You only get out what you put in, I think in this day and age it’s about a bit of luck and an incredible amount of hard work. If you put out real positive music into the universe, you will attract real fans and we think that’s what matters most.

Of course the underground scene is much more personal, it’s all about the people, the fans, and the love for the music.

Glastonbury Festival, without a shadow of a doubt!