Fronted by twin brothers Mike and Chris Smith, Veludo Planes gained a strong reputation last year as one of the unsigned bands to watch in 2017

Fronted by twin brothers Mike and Chris Smith, Veludo Planes gained a strong reputation last year as one of the unsigned bands to watch in 2017. Based on the south coast, Veludo Planes have previously supported Circa Waves, Blossoms and The Subways whilst gigging around the UK, France and Germany. Their latest single Luna enjoyed the support of BBC Introducing and Amazing Radio.

blu: For those who don’t know the band, what are your names and what’s your position in the band?

Veludo Planes: Hey, so I’m Mike and I’m the lead singer and guitarist in Veludo Planes. We also have Sam, our lead guitarist, Chris, our bassist and backing vocalist, and Ollie is on drums.

We describe it as anthemic indie backed by 90’s guitars – I guess purely because we are terrible at describing music. But I think a large portion of our sound has been inspired from listening to music of the late 90’s – so let’s say Britpop and shoegaze meets late 2000’s indie!

Is there a story behind the name Veludo Planes?

We have played together since we were 17, and I guess we spent the first few years cutting our teeth. We gigged a lot, wrote loads of songs, but we never really found our sound so things faded out. 4 years later we decided to start it up again and give it a real go. Me and Chris had written ten new songs so we were eager to get back into it. We had been called The Planes before and we felt like we had outgrown the name. However, we wanted an element of that old name to live on as a reminder of all those early rehearsals and shows – hence Veludo Planes.

How did each of you get to know each other before forming Veludo Planes?

Me Mike and Chris met at birth so I guess you can say we have always been close! We met Sam through sports clubs in our teens, and then we re-met each other at college when we were 16. Ollie was in our class there, and we naturally became friends, and then band members. 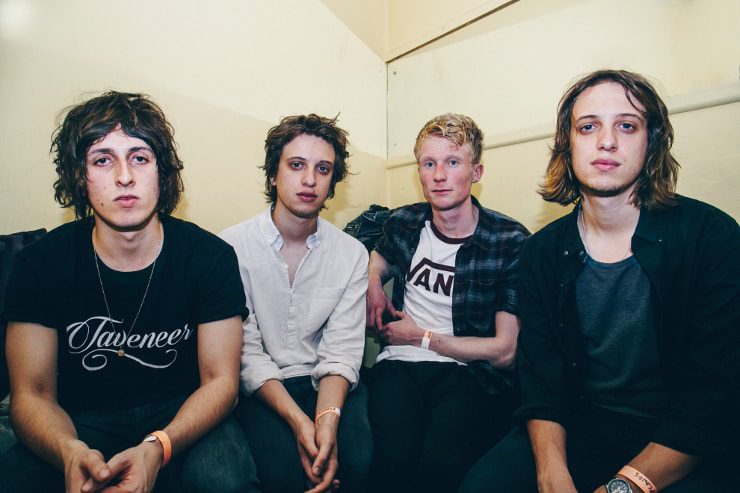 At what age did you Chris & Mike first find a love of music?

We grew up with our dad being very musical and playing in bands when we were younger. Music is something we grew up with. I can’t remember a point in my life where it wasn’t present, and I can’t remember a time where I didn’t want to be involved in it. So really what we are doing now feels like a natural progression from the days where we first picked up instruments.

Who did you guys grow up listening to and how have they impacted your music style today?

Growing up it was Beatles, Beatles, Beatles. We had all the albums, and watched the anthology box set at least once a month. I think this definitely taught us the importance of songwriting, harmonies and structure. Later on we got more into Supergrass, Primal Scream and lots of other 90’s bands and then all of us were huge Arctic Monkeys fans as teenagers. I think with songwriting it’s hugely important to listen to as much music as possible. Even if it isn’t immediately recognisable in your sound, it still builds your understanding of how to write a track.

Would you say your sound changed or developed in any way between the time you guys took a break from music whilst at university?

It has changed massively. I think it took us taking a break from the band for it to develop into what it is now. When you are gigging and writing constantly you can get stuck in your sound. It’s only when you take a break for a bit that sometimes you can develop and try new ideas.

You guys have played in a few different venues over the years. What’s your preferred venue: the big stage or intimate gigs in smaller venues?

Playing a packed small room where everyone is into it is just awesome. However, there is just something about playing a big stage that just gets you as a musician. The young kid in you is just so excited to be on the stage, sometimes it doesn’t matter if there are less people there, say if you’re early on in the day at a festival. No, I don’t think there is anything quite like a big stage as a musician.

Which current bands and artists do you guys listen to at the moment?

I’m really into some older music at the moment, so I guess I’m having a 90’s revival phase. Chris really likes Blossoms, Catfish and Yak. Sam is a big fan of Temples, and Ollie is die-hard Ryan Adams fan!

Veludo Planes have gained a strong reputation as one of the unsigned bands to watch in 2017, what’s the goal for you guys?

Well at the moment it’s to finish the EP and start the release process. It should be finished this month, so after that we will be sending out promo clips to promoters across the country for a mini tour in the autumn, with hopefully a load more support tours. We want to do a longer release campaign as it’s our debut EP, so we are aiming for a release late this year or early next year. Our aim is to play as much as we can, anywhere we can so that when it drops, people are really going to be excited for it! We have spent a long time writing and recording it, so we want to make sure every element of it is spot on, from the mastering, video production, through to PR.

Was there a particular mood you were trying to capture while writing songs for the next album?

3 of the 4 songs are new tracks, and I guess they are all a natural progression of our sound. The older we get, and the more music we listen to, the more our sound shifts into other genres. It happens naturally, so there is no point trying to resist it. We were aware our writing was gearing up, so we felt that we had to put something together that really reflected where we are going as a band.

When will your EP be ready?

We are hoping to finish recording in July, and to have mastering and video’s, promo shots done by the end of August. Then it’s flat out shows from September to December.

Are you pleased with the way your EP is progressing?

We are loving the recording process. Sometimes when you have deadlines to finish a single, you can end up rushing elements of it, and then you can listen back in a few weeks and really regret certain guitar or bass lines. We are going into the studio once a week at the moment, and this break is allowing us to listen to it with fresh ears, and really think about the overall production of the EP as a whole release. I fully recommend it to anyone!

Traditionally it was London, and I guess it still is. However, the Northern scene is massive. Manchester, Liverpool and Birmingham are all producing brilliant bands, so those are great places for musicians in the UK. Unfortunately, as most people are getting priced out of London (us included) the old idea of “move to London, get signed” seems to be less and less common in modern times. However, with social media and the right shows you can build a following across the UK. We get great shows in London despite not living there, and have had equal opportunities throughout the UK. I think building up a hometown scene is important, but sometimes that can happen strangely enough from what you do out of your hometown.

I think it is easier to get recognised, but harder to build a long-term career in music. I think that society’s focus on social media, and the internet has bred an industry which is perhaps more cutthroat. Artists come up with a huge first album, then if the second isn’t successful they are dropped. In many ways I think it’s to do with immediacy of social media and social trends. What’s popular one day is irrelevant the next. It’s hard for any artist to stay current within that cycle. The industry is responding to that social shift with a high turnover of artists particularly at a chart level, but I still feel that bands have an advantage in terms of a career longevity because their fan bases are often built on the road. It’s there that you meet the fans face to face and establish those lasting relationships. We still have people come to our shows, after seeing us in the emptiest of venues in the strangest of places!

Watching Arctic Monkeys headline Reading was amazing, so would have to say Reading and Leeds!