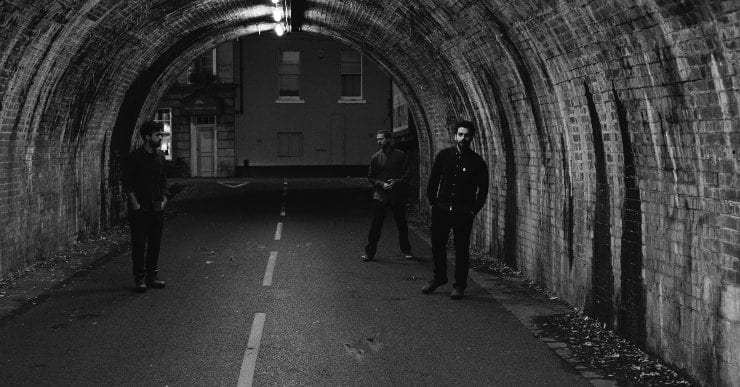 Port erin: the meaning behind the melody

Beguiling guitar and brass mark the start of “Ocean Grey”, the last track from Port Erin’s latest album of the same name.

Beguiling guitar and brass mark the start of “Ocean Grey”, the last track from Port Erin’s latest album of the same name. Praised by music critics for its cinematic style, the album has proved extremely popular since its release and to get an inside look at the song and its creation, we put a few questions to the guys who brought it to life.

Port Erin: Musically it is striving to sum up the sonics and moods throughout the album, lyrically it is honing in on the album’s recurring theme of the migrant crisis that is happening in Europe. It’s a slow-paced, cinematic yet intricate piece with a very “up-front” vocal delivery.

The song came from the guitar. A lot of our music is written from improvised jams but this track was written in a traditional guitar, melody and lyrics first way before working on the arrangement. The embryonic version of the track was played at a soundcheck in early 2016.

We took on a very judicious and cautious approach when developing the song. It’s got the original elements that were placed when we were first writing the arrangement. An approach of “less is more” was adopted – we didn’t want to overcook it. We spent some time in the studio (when recording the final version) working on linking sections within the drums, changing placements of the hit-hat, adding the trumpet parts and vocal harmonies. The fundamentals are much the same as the very first demo version.

Not particularly. As we knew what approach we needed to take, being conscientious about not over-playing, it came together pretty smoothly. During the mixing stage we were very careful with where things would be placed – that took some time. Having the right vision of the song before recording meant that performing it in the way it was needed for the recording, and mixing after, all happened relatively quickly and smoothly.

Reuben: I wanted to put myself in the headspace of people who suffer a lot more that I do – trying to reach a level of understanding as to what some people have to go through meant a lot of different emotions were conjured up. I read many people’s accounts of making the trip across the Mediterranean Sea and watched many documentary about the crisis to ensure that I knew as much as I possibly could before approaching the task of the lyrics. I also experience an element of guilt and confusion – who am I, in my little world happily surviving in the UK, to sing and write about the demise and suffering of others?

Is there any particular meaning/message behind this song?

These are the final words based on the album’s running theme of the migrant crisis. It’s trying to imagine what it must be like to be forced to gamble your family, children, friends, money, life away to make a journey that has no guarantee of survival – “chancing on a wave”. The song flips to the first person in the chorus – further embellishing the lyric with the female vocals. It’s meant to come across as a dirge sang by many, but with a muted sadness, hence the purposefully hushed female vocal delivery.

We don’t actually play this song live. Every album there’s usually one track that just stands alone. Typically when drawing an album to a close we have a more reflective number and often these more down-tempo songs only work in certain live situations. Should we play a large scale show with extra musicians and a long stage-time, I’m sure we’d work this song into a set, but for summer shows at festivals we play our more upbeat numbers. “Ocean Grey” comes from your latest album of the same name. What was the main inspiration behind this album?

Throughout the writing of “Ocean Grey” (and a long time before we had the album title) the migrant crisis had been on our minds. Over 10,000 people have died in the Mediterranean Sea alone during the time it took us to write and record the album. It became the strong, recurring theme for the album. It’s easy to become immune to the media’s incessant use of graphic images and shock headlines, especially when it’s as frequent as it has been. It’s questioning our roles in the Western world and trying to find a place and understanding in the bigger picture.

What has the reaction to your album been since its release?

It’s been incredible, the best reaction to a Port Erin album yet. We’ve had support and airplay from BBC Introducing, BBC 6 Music and we’ve received great reviews from national press publications such as The Times, The Guardian, Drowned In Sound, Clash Music, Metro and many others. For an unsigned act we feel we couldn’t have done any better with this release.

The reaction to “Ocean Grey” has been the clarification we needed that we’re heading in the right direction. It’s made us feel confident and at ease with ourselves which has lead to us spending every free moment in the writing room. We’re halfway there with album five and “Ocean Grey” hasn’t even been out for four months.

We would like to thank everyone who’s shown support with this release, if you like “Ocean Grey”, you’re going to love album five!