Express Yourself! What Our Individuality Says About Us

22 March 2022 - We took a deep dive into the public’s ideas around individuality, how they express themselves and what it says about them. Click to read the results.

As the saying goes, variety is the spice of life. This couldn’t be truer when we look at individuals, their preferences and how we as people express our personalities.

Though there’s no doubting that everyone is different, it’s also the things we have in common with others that helps us identify ourselves and form relationships with groups.

Music, clothing, language, food, and many other cultural preferences we like or loath help form our personalities. As a result, we gravitate towards people who share the same cultural values as us, thus forming cultural groups.

Our research dives into these preferences, surveying over 2,000 participants from across the UK aged between 25 and 55 to identify other people’s personalities and what traits we rightly or wrongly attach to those identities. Keep reading to see what we found.

Essentially, subcultures are comprised of people who hold similar values, norms and interests that are separate or different from the wider, supposedly more conventional parameters of society. Depending on how you view them, subcultures have been part, or on the fringes of society for generations.

The different varieties of subcultures are endless and continue to develop with time and changes in culture. Some of the more famous subcultures include hippies, goths, new romantics, and mods and rockers.

While all subcultures are heavily influenced by art such as music and literature, they also very often share a similar ideology that rejects the status quo or more general societal beliefs. As a result, they can be a very popular outlet of expression for people trying to figure out who they are as individuals.

Our research delved into all the ways in which people express themselves, as well as looking at how we think people perceive us through those forms of expression. We even went as far as to see what our tastebuds say about us! Here’s what we found.

As mentioned previously, the number of subcultures out there is vast and tends to change over time. However, according to our research there are some that seem to stand out more over others.

Of the people surveyed, a fifth of those have at some point identified as a goth, a subculture that began in the United Kingdom during the 1980s punk scene involving dark, gothic attire and heavy guitar-based music.

Interestingly, after goths, a five-way tie between hippy, emo, new romantic, punk and gamer subcultures came in at 16% each, an interesting find due to the varying age of each subculture.

While hippies, new romantics and punks have been around since the end of the last century, emos and gamers have only formed as subcultures in recent years yet still hold as popular demographics. 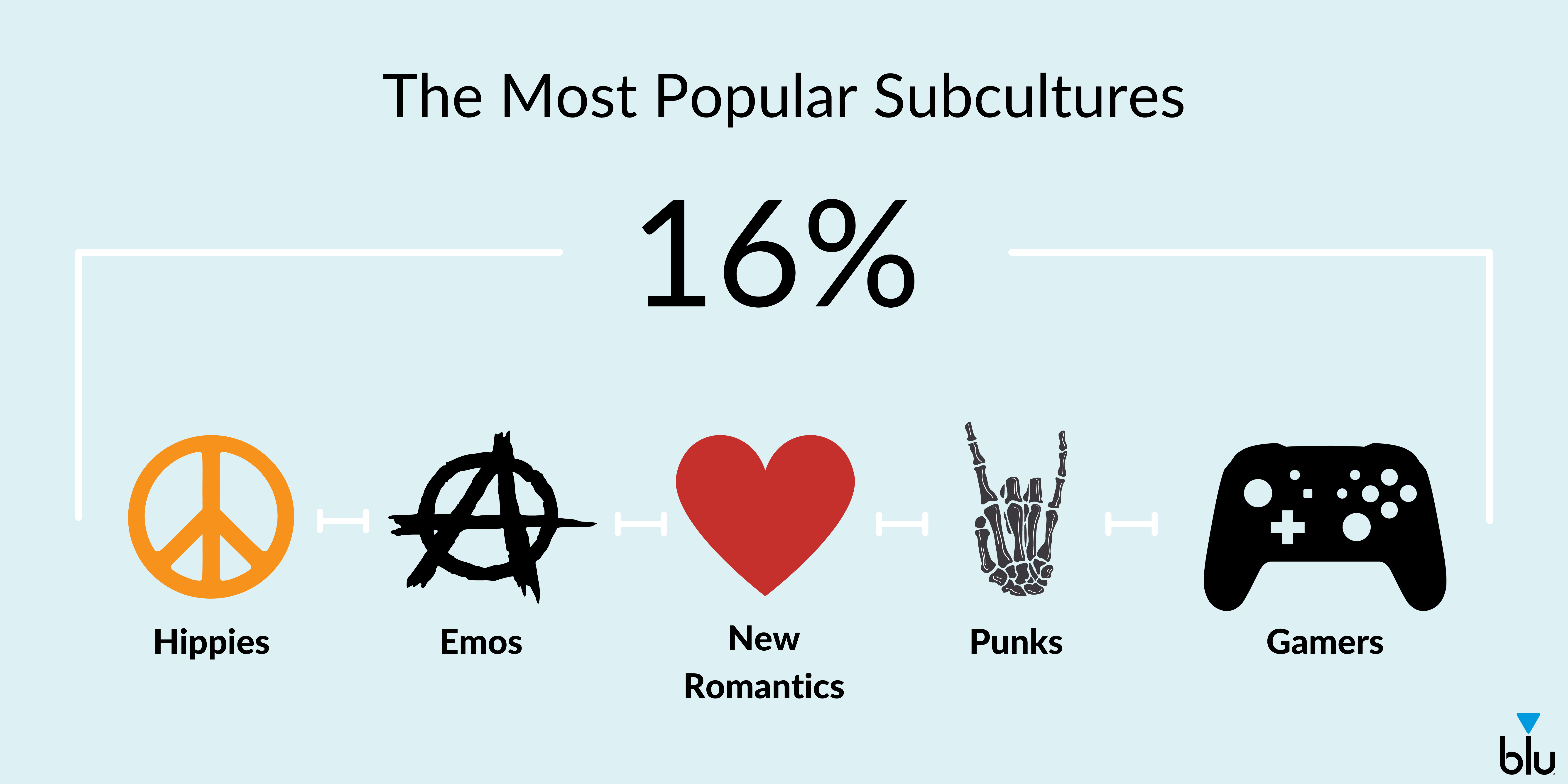 How we Feel About Subcultures

It’s one thing to be part of or identify with a subculture at some point in your life, it’s another thing to adopt that culture for a lifetime.

This was undoubtedly highlighted in the results we obtained, where we found that 60% of those surveyed no longer identified with the subcultures they had done earlier on in their lives.

68% referenced growing out of said identity as the reason why, with 45% stating a personality change and 21% no longer being friends with those from said subculture. 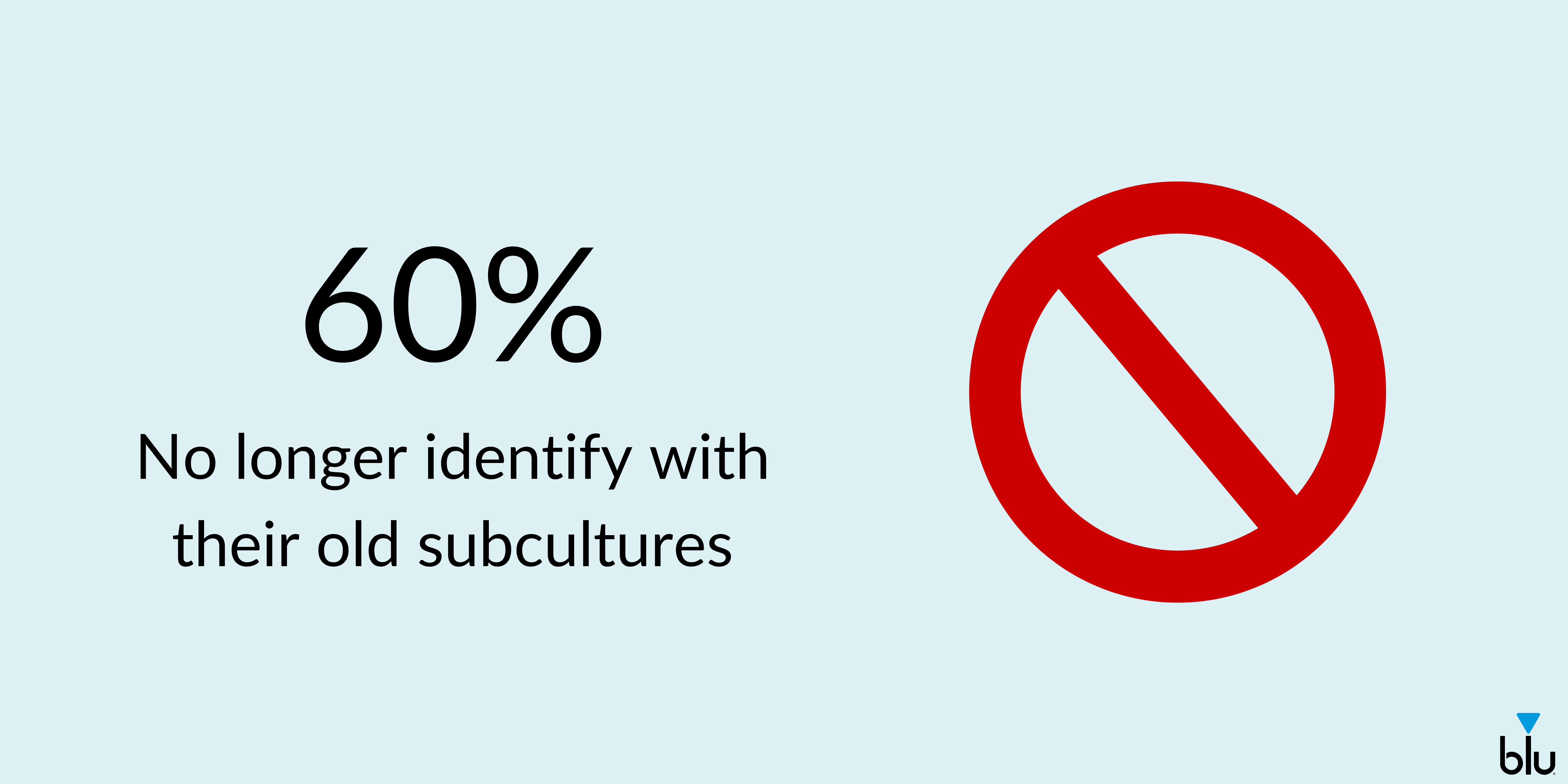 How We Express Ourselves

Interestingly, though our research shows most of us no longer identify with subcultures where we once did, the things that make up those previous identities still ring true with how we express ourselves today.

Over a third of those surveyed still express themselves with their music taste and the clothes they wear, two aspects of expression synonymous with being part of many subcultures.

Where we are or who we are surrounded by also plays a big role in our ability to express ourselves, our study has found.

What Our Tastebuds Say About Us

We didn’t just stop at subcultures and personal interests, we wanted to go further. Was there any correlation between our tastebuds and personality traits? The results spoke for themselves.

Over a quarter of those surveyed thought those with a sweet tooth were caring and easy going, regardless of whether they had met them before.

For those that like to spice things up, over a third perceived people who like a bit of spice to be confident and outgoing.

These were fascinating to uncover, as it shows that how we judge other people, even before we meet them, can be based on as little as their tastebuds. 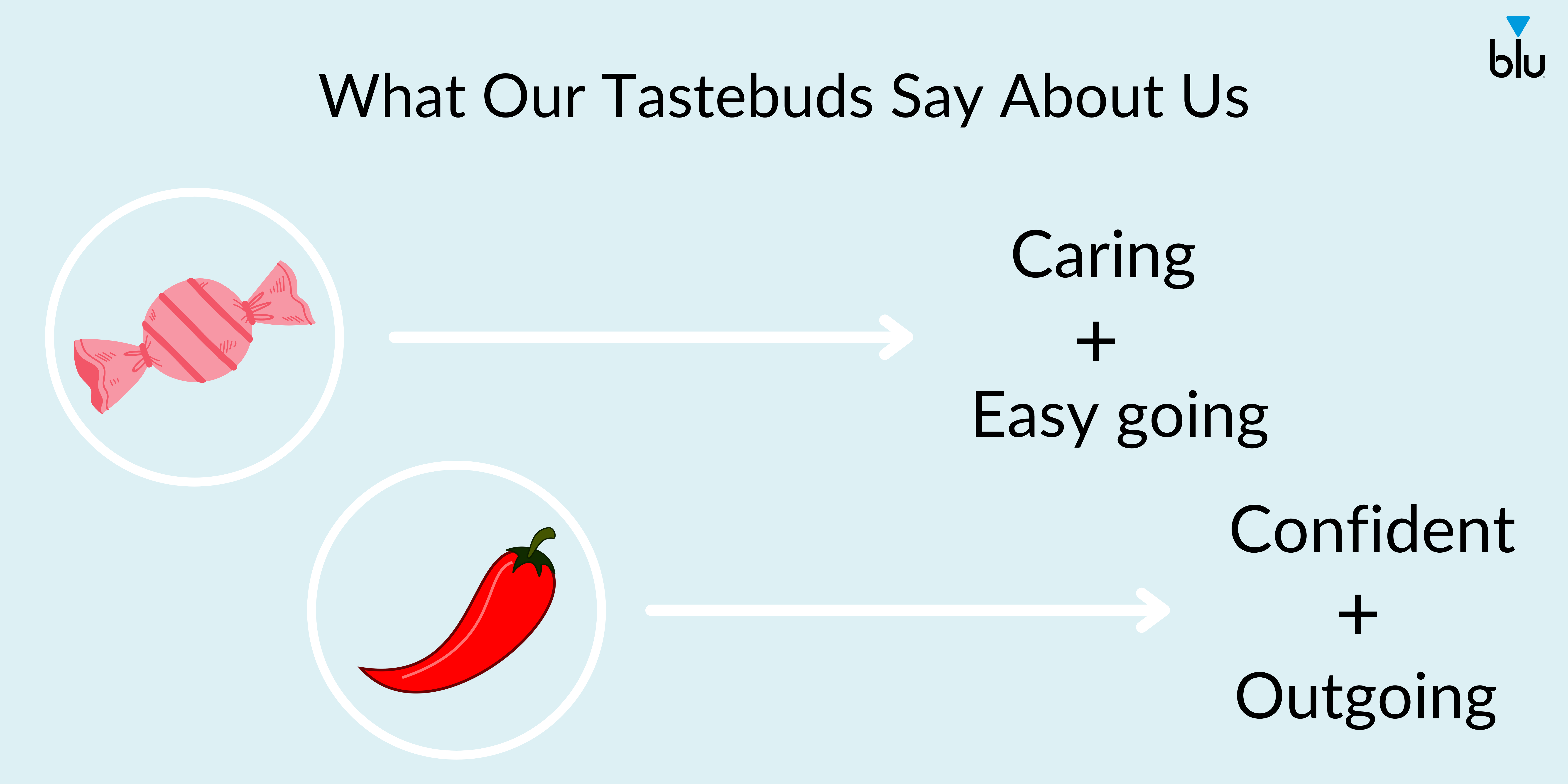 How We Perceive the Expressions of Others

Arguably now more than ever, we are susceptible to judging people superficially. Whether we know them or not, digitally or in real life, we judge people in the same way we express ourselves.

Nearly three quarters of the people surveyed agreed to having judged people based on the way they talk (74%), the way they dress (73%) and music taste (68%).

Additionally, just over half of those surveyed judged people on their hobbies or the décor of their homes.

Express Yourself with blu

We’ve seen in our research that expressing your identity in the way you want can be really tricky, especially when so many factors are determined by the people around us.

At blu, we want to help you express yourself as much as possible, offering a wide array of myblu liquipods and e-liquid flavours to choose from.

Don’t let things get in the way of who you are and express yourself with blu.