Updated 23 March 2022 - Wondering whether to pack your e-cig in your hand luggage, hold luggage, or even at all? Here's our guide to travelling and vaping.

Wondering whether to pack your e-cig in your hand luggage, hold luggage, or even at all? If you’ve got a getaway on the horizon and you’re not sure how your e-cig fits in with your plans, then now is the time to get clued up – after all, no-one wants to start their holiday on the wrong side of the law.

When it comes to vaping in the wrong places in foreign countries, there isn’t really a blanket punishment. While some might just give you a slap on the wrist, with others, worst case, you could find yourself behind bars.

But first, let’s take a look at actually getting to your end destination.

Getting through airport security

Different airlines will have different rules, but, generally speaking, most allow you to pack your e-cig in your hand luggage. That said, some do have issues with the lithium-ion batteries. Another problem you might encounter is if your e-liquid’s in a container larger than 100ml – it’s standard security procedure that all liquids must be 100ml or less. However, all our blu vape e-liquid bottles are 10ml, and our liquidpods are just 1.5ml each, meaning these should be fine to take in hand luggage.

With that in mind, it’s probably a good idea to check with your airline before you pack to make sure you’re not a) breaking any rules, and b) at risk of getting it confiscated. E-cigs, vape pens, or similar devices are a big no-no in your hold luggage – whichever airline you’re with. This is a worldwide ban and exists because they pose a fire risk. 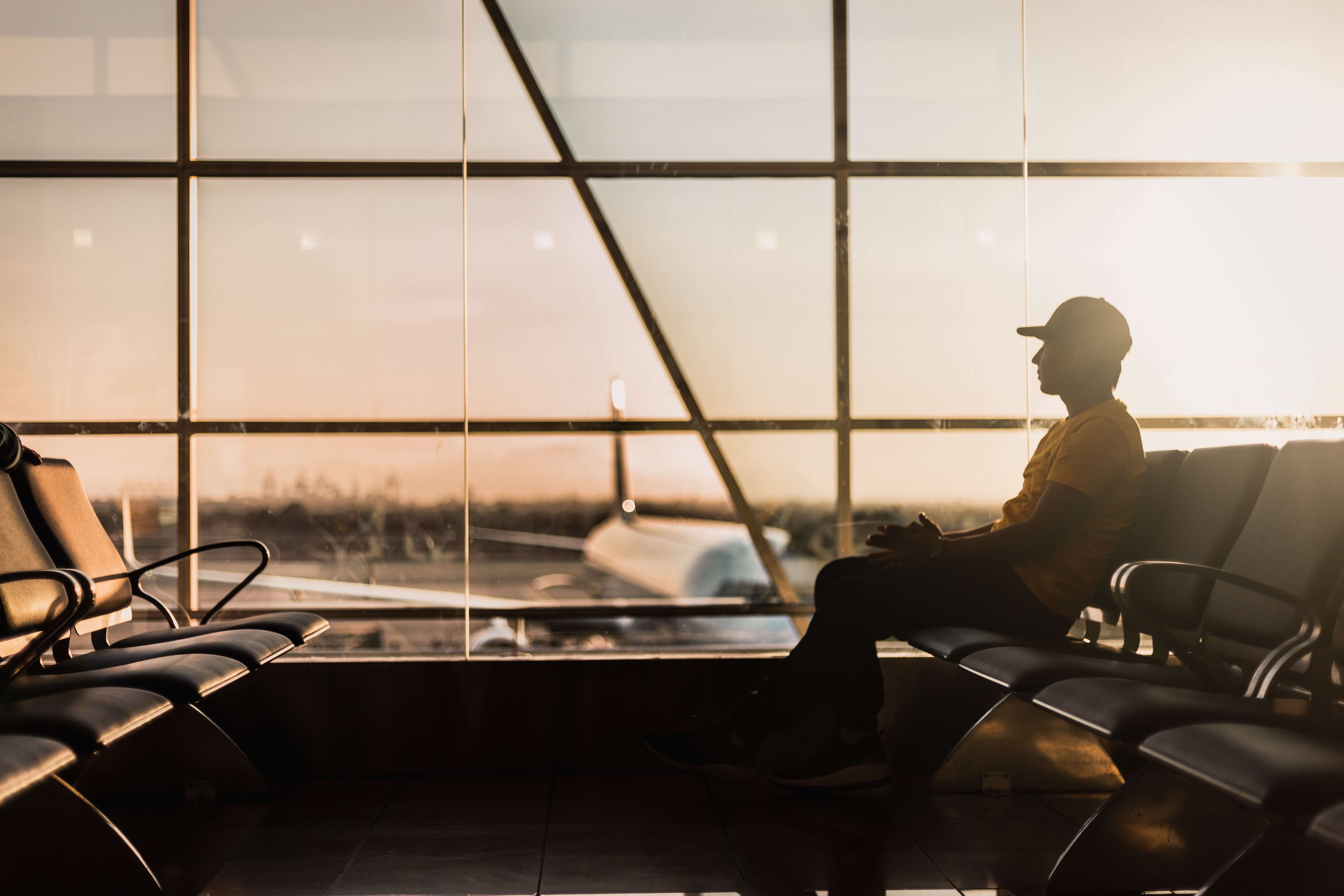 E-cigs at the airport

Using e-cigs is banned across all UK airports, and so you won’t be able to use it anywhere within their terminals. If you need to get your fix before you board, you’ll have to use the designated smoking and vaping areas outside the building.

Most airports will have clearly-signed posters around the place letting you know what their stance is, but if you want to get an idea before you go, you can find out what most of the major airports do and don’t here . And if in doubt, check at your departing airport’s information desk.

If you’re changing flights in a country where vaping is illegal, you shouldn’t have a problem carrying your device in your hand luggage. To be safe though, there’s no harm in checking with your airline ahead of time.

Their rules might be different if the airport is your final destination though. If e-cigs don’t comply with your arrival airport’s regulations, you could be forced to hand it over. To avoid any nasty surprises, do some digging and see if this is likely to happen before you fly.

Can I take my e-cig on the plane?

Generally, most airlines will let you take your e-cig on the plane in your hand luggage. If your device has cleared security, then there’s no reason it should be disallowed on the plane between security and boarding.

It’s worth noting, although you still aren’t using it, you’re not allowed to charge your e-cig during flights either.

Can I use my e-cig during the flight? 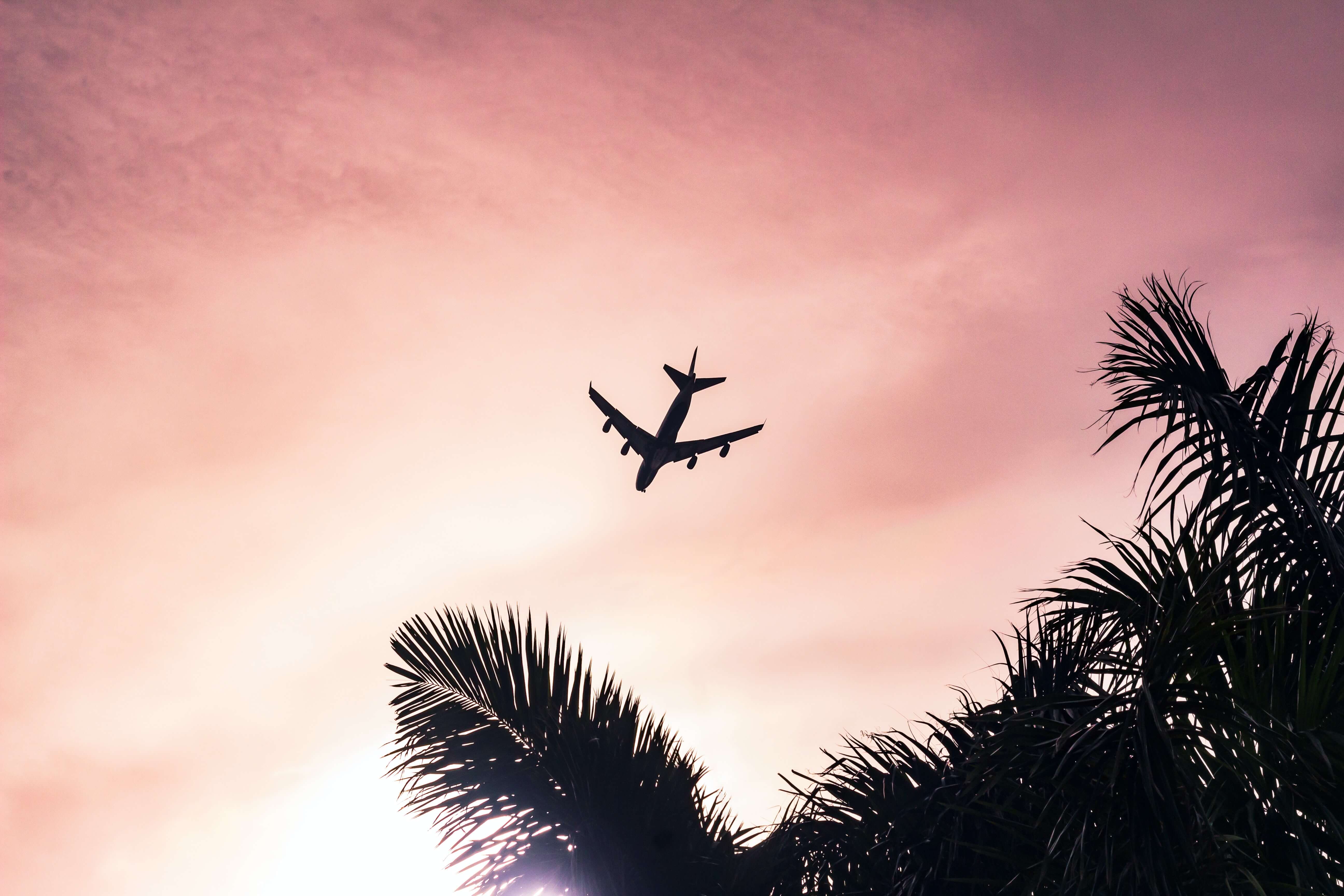 This is another area that will vary depending on the airline you’re flying with, but it’s typically a no. Even if the airline lets you carry your e-cig onto the aircraft in your hand luggage, turning it on and using it is a different story.

If the airline isn’t clear when it comes to their policy around using e-cigs in-flight, it’s always safer to assume it’s not allowed and then ask.

If you’re thinking of rebelling against the airline’s rules and sneaking a quick vape in the toilets or under your seat, you wouldn’t be the first, but it absolutely isn’t something worth even contemplating.

Firstly, it’s likely your vaping device could trigger the aircraft’s fire alarms – for your safety, they’re extremely sensitive. And secondly, you’ll probably find yourself facing a fine and in trouble with the airline.

While e-cigs are very much mainstream in the UK, not everywhere in the world has the same stance. So, to avoid landing yourself in hot water while you’re away, make sure you’re familiar with your end destination’s e-cig rules.

Generally speaking, Europe is pretty lenient when it comes to vaping – there are a handful of exceptions though. If you’re holidaying outside of Europe it’s even more important to do some pre-travel research. E-cigs aren’t as pronounced around the globe, and some countries come with more severe punishments than others. 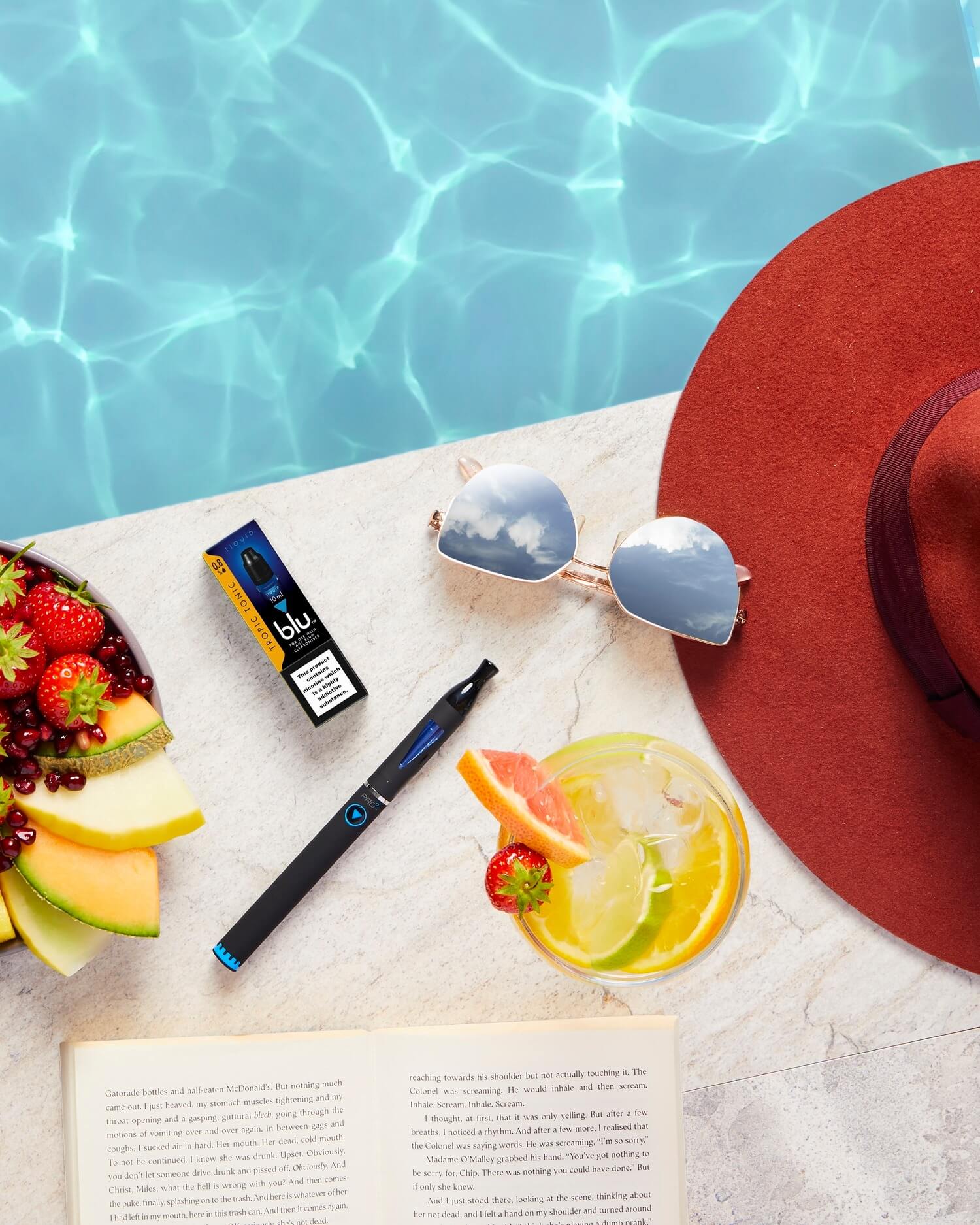 Countries where vaping is currently legal (bear in mind all of these countries have their own unique restrictions on vaping that it is worth learning before you travel): 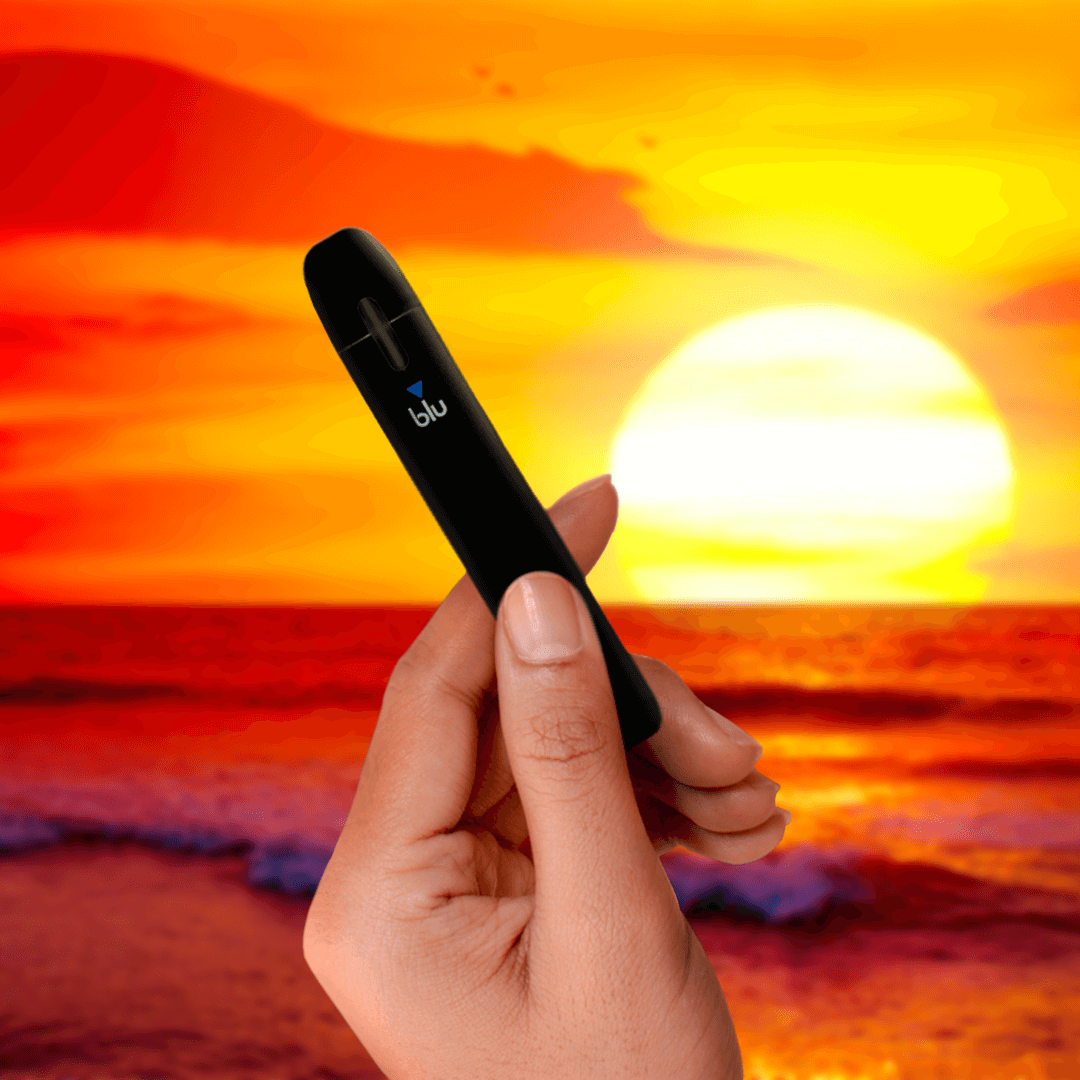 Countries where vaping is currently banned (not all of these places have severe punishments for vapers, but some do):

The laws around vaping are constantly evolving around the world though, so make a point of getting up-to-speed with rule and regulation changes before each trip.

It’s equally important to make sure you know what the country’s sanctions are too. We absolutely don’t advocate breaking the rules, but if you do go vigilante on your vacation, you need to be aware of the risks.

Some will just confiscate your device, some will hit you with a fine, and some will send you to prison. Ultimately, we’re sure you want to avoid all of the above.

Using your e-cig in the hotel

We’re sure you’re sick of hearing this by now, but this is yet another element that will differ depending on where you’re staying. Some hotels will have absolutely no problem with you vaping anywhere within the premises, whereas others will veto it completely.

If you’re planning on puffing your e-cig while you’re lounging around your room, it’s probably best to check if you’re allowed at reception first.

It’s unlikely, but it’s possible. It all depends on the type of detectors the hotel’s got installed. It’s a pretty common misconception that, because vaping doesn’t produce smoke, it won’t trigger fire alarms. But that’s not necessarily the case.

For small smoke detectors the small traces of vapour could be enough to get the bells ringing, and, if it does, you could be slapped with a fine for the inconvenience.

Tips before you travel

To avoid any unpleasant surprises, here are a few pre-travel preparation tips to help you out:

If you’re heading off on your holidays soon, we hope that you have an amazing trip! For more information on where you can and can’t vape, check out our Explore section.