Welcome to our guide to the blu PRO Kit. On this page, you’ll find everything you need to understand and get the most out of your device.

The blu PRO has an optimised coil resistance which creates a smoother taste to give you a unique vaping experience. Your blu PRO is shipped to you with a partial charge but we recommend that your device is fully charged before your first use. To get started, all you’ll need is your fully charged blu PRO and your favourite blu Liquid.

What's in the blu PRO Kit 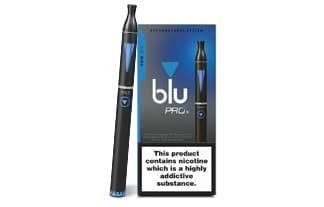 Your rechargeable device will arrive partially charged so that you can get going straight away. All you have to do is fill and prime your blu PRO Clearomiser before using it.

How do I know when I need to charge my blu PRO?

The blu PRO has indicator lights to help you monitor the remaining charge on the battery and an upgraded battery connection. This means it can be fully charged in just 3 hours and will last for longer than ever.

When your blu PRO Battery starts to run out of charge, you will start to notice a few changes in the way your blu PRO is performing. This may include less vapour production and a less intense flavour. When you notice any of these things, this is a good time to prepare to recharge as your charge will soon be completely depleted. When your charge has depleted, the blu PRO will stop producing

How do I charge my blu PRO Kit?

To charge your blu PRO Kit, complete the following steps:

To fill your clearomiser with blu Liquid, complete the following steps: